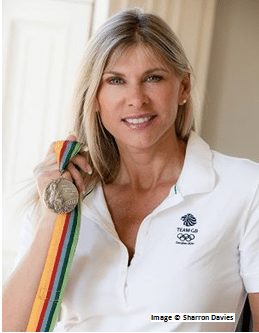 Sharron Davies has been one of the UK’s best known and most popular sportswomen since bursting onto the scene as a 13 year old Olympian in 1976.

As is often the case with prodigies whose success and stardom arrives so early, Sharron decided at the age of 18 that she needed a break from training and competition and ‘retired’ to pursue a media career. However, the lure of the water proved too much and she returned in 1989 and promptly regained her national 200m title. As ladies captain of Britain’s 1990 Commonwealth Games squad she led by example and returned with silver and bronze medals.

Twice voted British Press Sportswoman of the Year, Sharron’s incredible international career spanned three decades, included numerous major titles and medals, 200 British records, some of which stand to this day (including the 20- year-old 400 IM record), 5 World Masters records and an MBE awarded by the Queen for services to sport. Retiring from competition in 1994 Sharron has become a regular on television and in the press.

As a key member of BBC television’s commentating and presenting team she has covered many major events including the Seoul, Atlanta, Sydney, Athens and Beijing Olympics. Sharron has also presented TV’s The Big Breakfast, been the subject of a Channel 4 documentary, co-hosts Superstars, adorned the covers of many leading magazines, written for publications such as Total Sport, Cosmopolitan and The Independent, as well as contributing magazine features on one of her biggest hobbies – interior design.

As patron of Disabled Sport England and The Sports Aid Foundation, Sharron devotes much time to charity as well as being an in demand public speaker.

We very much enjoyed Sharron’s company at our conference. She was a great hit with our audience, and won them over with her life story which very much hit home to people the necessary attributes needed to be a winner. Not many people leave our auditorium with a standing ovation, but Sharron did.