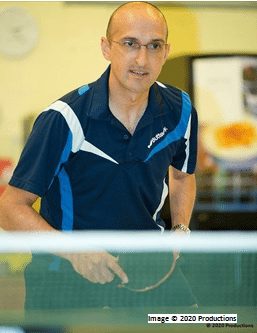 Matthew Syed is a former Olympian and one of the world’s most influential thinkers on the science of high performance. He is in huge demand to deliver lessons from his bestselling books ‘Bounce’ and ‘Black Box Thinking’.

A two-time Olympian and three-time Commonwealth Champion, Matthew Syed was one of the most successful British Table Tennis players this country has ever seen. Having now retired from the sport he has become a successful British journalist, broadcaster and best-selling author. Matthew is currently a columnist and feature writer for The Times and writes a Wednesday column on sport as well as penning reviews, opinion and interviews. He has won numerous prizes for his writing including Sports Journalist of the Year at the British Press Awards, and Sports Feature Writer of the Year at the Sports Journalist Association Awards.

Before becoming a writer Matthew was the England table tennis number one for almost a decade, three-times Commonwealth Champion, and twice competed for Great Britain in the Olympic Games (Barcelona 1992 and Sydney 2000). His style was unusually defensive, playing strokes from the back of the court described by his Times colleague Simon Barnes as “spectacular roof threatening parabolas”.

In addition to writing, Matthew also commentates regularly on sport for the BBC and Eurosport and is a regular contributor to radio and television. His film for the BBC, China and Table Tennis, won the bronze medal at the Olympic Golden Rings ceremony in Lausanne. Matthew has continued to support Table Tennis since retiring and was one of the co-founders of TTK Greenhouse, a charity which “empowers youngsters through sport” and which currently supports more than 10,000 young people on 31 full-time school programmes.

A fascinating and thought-provoking speaker, Matthew addresses audiences on performance, leadership and the science of success.

Mathew was fantastic for our recent 6 Months to Go event at Procter & Gamble. He was a brilliant public speaker, engaging the whole audience with his great stories but also amazing table tennis skills. We had a wonderful day with him and are still revelling in the skill and tactics behind his game as well as his engaging personality. We received a great service from Raise the Bar which helped deliver a fantastic event.