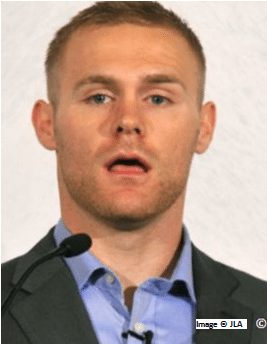 Mark Ormrod served for ten years as a Royal Marine, in both Iraq and Afghanistan. While on manoeuvres in Helmand Province he was caught in a landmine explosion and lost both legs and one arm.

In an extraordinary demonstration that life can go on even after tragedy, he’s since completed The Gumpathon, a four-man run across America inspired by Forrest Gump. Mark defied expectations at every turn of his rehabilitation.

After initially being told he’d never walk again, he first set his sights on standing to receive his campaign medal. The next goal was to walk down the aisle with his fiancée (to whom he had proposed in a moment of consciousness in intensive care). Having achieved those dreams Mark found new challenges, from the mundane like driving a non-adapted car to the extraordinary like skydiving and hand-cycling 3,000 miles around the UK in a single month. He also carried the Olympic torch.

In a compelling tale of survival against the odds, thanks to his own grit and determination, Mark tells of horrific injuries and remarkable recovery. He explains how, at the very brink of despair, his ‘Marine’s ego’ kicked in and he conquered his new bionic legs. In an authentic and uplifting presentation, he proudly describes the journey – and how he now hasn’t needed a wheelchair for more than three years.

Mark has written an account of his experiences in Man Down. He works for the Royal Marines Association, raising money for veterans, the injured and bereaved families. He’s also looking to his next challenge: swimming the English Channel!

Mark was hired as a speaker to tell his story focused on delivering messages of overcoming adversity, goal achievement & motivation. I have heard many speakers in my time, but Mark’s story was truly inspiring, delivered with honesty, emotion and his unique humour made for the highlight of our conference.