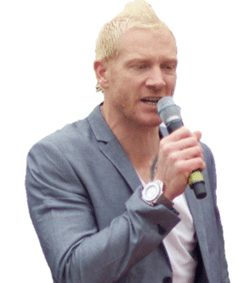 Iwan Thomas MBE is one of the finest 400m runners that Britain has ever seen and he is a former European, Commonwealth and World Champion and current British Record Holder.

He was a late starter to the world of Athletics, preferring to concentrate on BMX bike riding (ranked fourth in Europe) than to run one lap of the track. He started his athletics career in 1992 when he represented the British 4 x 400m relay team at the World Junior Championships.

In 1993 whilst studying for a Sports Management Degree, Iwan juggled his studies and training, making excellent progress every year setting 9 Welsh 400m records in the process. He was rewarded for his superb form and was picked to represent the British 4 x 400m relay team in 1995 at the European Cup which they won. At the Olympic Games in Atlanta in 1996 at the age of 22, he came 5th in the final of the 400m and won a silver medal in the 4 x 400m relay.

In 1997 Iwan, claimed his first UK Championship title in Birmingham and setting a new British record. Since retiring from athletics Iwan has become a prominent figure in the media and presents the McCain Track and Field Show on Channel 4. He regularly appears on a variety of TV and radio shows and in 2009 showed his culinary skills when he was the runner-up in the TV series Celebrity Masterchef. Most recently, Iwan appeared in the 2017 edition of Bear Grylls’ Celebrity Island.

Iwan has been a long term supporter of the OCS Young Sports Person of the Year Awards, presenting awards, providing video clips, interviewing and inspiring our finalists. Iwan is able to communicate his passion in an engaging and enthusiastic manner.

Image copyright: The image was originally posted to Flickr by Nick Webb at http://www.flickr.com/photos/nickwebb/6127773577/ This file is licensed under the Creative Commons Attribution 2.0 Generic Licence.