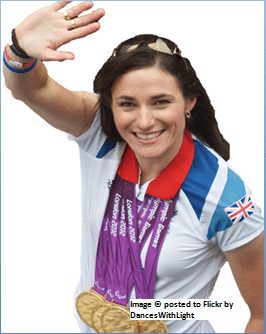 Following on from her Rio 2016 and London 2012 successes, Sarah has also become the 1st Paralympian to make the successful switch into winning able-bodied titles on both the road and track. Starting with two Individual Pursuit titles in 2008 and 2009 and the Team Pursuit title in 2010, Sarah has also had success on the road winning the 2010 2 Days of Bedford International Stage Race, as well as being the first female paracyclist to ride in an able-bodied professional race. Sarah is an articulate and accomplished individual who swam at world-class level from 1992-2005. During this time Sarah won 6 world titles and 16 European titles as well as her Paralympic success.

Following this glittering swimming career, Sarah made her debut for the British Cycling team, winning 5 gold medals and breaking 1 world record, at the 2005 European Championships. After officially changing sports on 1 October 2005, Sarah has since amassed a further 8 world titles and now approaching the 20th anniversary of her career as an international athlete has broken 70 world records. In the 2016 Rio Paralympic Games Sarah won her 12th gold medal surpassing Tanni Grey-Thompson, one of her hero’s, medal count and continuing her title as Great Britain’s most successful Paralympian. She then went on to win 2 more golds in the C4-5 – Road Race and the C5 – 3km Pursuit.

Sarah delivers stories from her sporting career so far and links the lessons she has learnt through sport to improving any aspect of your life, business or educational ambitions. In a world where the smallest margins are the difference between winning and losing, Sarah can explain what it takes to have to push our body and mind to their limits in order to achieve against the odds.

On behalf of the Aurum team, thanks for your recommendation of Sarah Storey. It was a privilege for our staff to meet a World and Olympic paralympian. Sarah demonstrated winning behaviours and delivered a world class performance with 3 great presentations and has created the Belief that dreams can become a reality.